Learn how the World Bank Group is helping countries with COVID-19 (coronavirus). Find Out

Working for a World Free of Poverty

Procurement Policies, Guidelines and Documents below are for Projects Prior to July 1, 2016 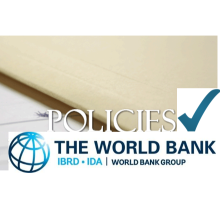 The following are policies, procedures, and guidance governing procurement in Bank-financed projects, for use by Borrowers and their implementing agencies.

When the World Bank provides financing to its member countries for investment projects, each project is governed by a legal agreement between the World Bank and the Borrower government agency who receives the funds. One of the key obligations in the "loan agreement" is that governments abide by the Bank's procurement policies, as detailed in the Guidelines for Procurement and the Consultant Guidelines.

The Procurement Guidelines establish the arrangements to be made for procuring the goods and works (including related services) required for the project. The Consultant Guidelines define the procedures for selecting, contracting, and monitoring consultants required for projects. The Borrower is responsible for advertising business opportunities arising from Bank-financed projects.

Guidelines for Procurement under IBRD Loans and IDA Credits and Grants

Prequalification Document for Procurement of Works [February 2020, Spanish]
For use in prequalifying applicants who express an interest in bidding on large building and civil engineering contracts under ICB procedures. The principles may also be applied if prequalification is needed under NCB.

Procurement of Small Works [January 2020, Spanish]
For use when a prequalification process has not taken place before bidding and, therefore, post-qualification applies.

The standard bidding documents in this publication have been prepared for use by Borrowers in the procurement of works for "smaller" contracts-valued at generally less than US$10 million-by international competitive bidding (ICB). These documents may also be adapted to national competitive bidding (NCB). The Standard Bidding Document for Procurement of Small Works is based on the Master Document for Procurement of Small Works, prepared by the Multilateral Development Banks and International Financing Institutions.
Previous English versions: October 2017, January 2017, 2015, 2012, 2010, 2008, 2007, 2004
Spanish: October 2017, January 2017, 2010, 2008, 2004
French: October 2017, January 2017, 2004

Procurement of Textbooks and Reading Materials [April 2015]
Use of this document is mandatory in the procurement of textbooks through ICB. Use applies when a prequalification process has not taken place before bidding.
Previous English versions: 2014, 2004, 2003
French: 2014

UN Agencies – Please see below for some Standard Forms of Agreements

FAO - Food and Agriculture Organization [May 2017]

IOM - International Organization for Migration [May 2018]

Haven't found what you're looking for? Check the Procurement Document Archives

World Bank borrowers must advertise consulting and bidding opportunities, and also publish contract awards (in accordance with paragraphs 2.5 and 2.31 of the Guidelines on Employment of Consultants by World Bank Borrowers and paragraphs 2.7 and 2.59 of the Guidelines on Procurement of Goods, Works, and Non-Consulting Services, 2011 versions). Details of these requirements are detailed in Annex 1 of both documents.

How to Advertise Procurement Notices
The Bank strongly encourages borrowers to use the Client Connection (CC) website when publishing notices. Notices submitted through Client Connection are automatically sent to UNDB online, dgMarket, and the Bank’s external website.
To establish an account in CC, borrowers should request registration information using the link on the bottom of the CC home page, being sure to request Procurement access.

Current CC users that need assistance with publishing notices can use the Feedback feature available on all CC pages, which will notify the Client Connection team in ISG. Alternatively, they can contact their project’s procurement team.
Bank staff assisting Borrowers are to use Client Connection when publishing notices. Bank staff should contact Regional staff indicated in the table below for assistance.

You have clicked on a link to a page that is not part of the beta version of the new worldbank.org. Before you leave, we’d love to get your feedback on your experience while you were here. Will you take two minutes to complete a brief survey that will help us to improve our website?

Thank you for agreeing to provide feedback on the new version of worldbank.org; your response will help us to improve our website.

Thank you for participating in this survey! Your feedback is very helpful to us as we work to improve the site functionality on worldbank.org.